In 2017, I worked alongside creative director, Eugene Hughes, and film director, Ben Mallaby, on an inspiring ARTGYM film documentary project – The Moving Theatre. Eugene’s creative vision was to take four real-life stories of migration and to playback key moments of these journeys to each storyteller through theatre and puppetry. As story director on the film, I worked closely with storytellers to help them tell their stories and equally to support the team of puppeteers in bringing stories to life. Arts therapy was crucial to the methodology of making The Moving Theatre.

In the beginning, we designed creative workshops that enabled our storytellers to explore and express their stories, using a range of arts and natural materials, to get under the surface of their experiences in a creative, yet safe way. The storytellers themselves seemed surprised by what came out from these workshops. This process enabled us to take deeper emotional content, and work with the puppeteers to shape the theatre pieces. The film documentary could only happen because our storytellers were so generous in sharing their stories and feelings. 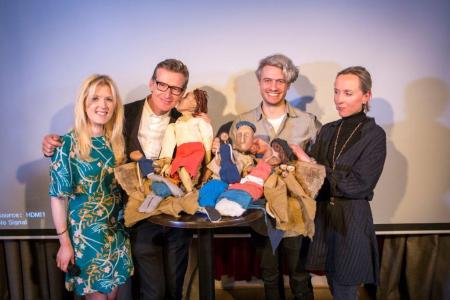